I'm sure none of you care, but I was going through the pictures from the weekend (more on that later) and found these. I was making dinner last week and Peepers the Cat was going crazy running around the house. We think he only likes to play when he has an audience, so he gets pretty wild when we come home in the evenings. Anyway, he was determined this night to explore the vast world behind the washing machine and water heater. Not so vast a space, as he found out. 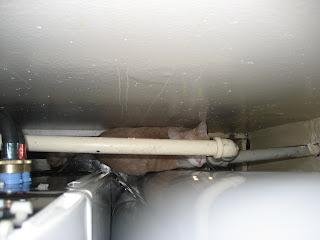 His meows were pretty pathetic, but I must not have been too concerned, as I snapped quite a few pictures (what else am I going to take pictures of on a Wednesday night?). 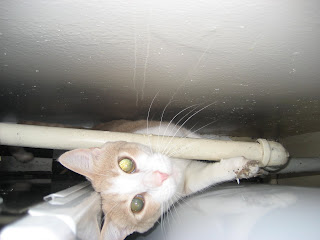 Don't you worry, he's fine. And about 6 minutes after I rescued him from certain death, he was trying to figure out how to get back there again. Stupid cat.
Posted by Jennifer at 5:50 PM

Remember when he was behaving "inappropriately" when I was there? And you said "oh he doesn't know what to do" and Wes said "any cat of mine knows EXACTLY what to do" Haha. Love him. Love you both.

reminds me of something he said this weekend:

we were in the Brooks Brothers outlet some little kid was SHRIEKING about something. Wes looked at me and I shrugged and said, "that's what kids do." His response: "not my kids." rrriiiiiiiiiigght, honey. whatever you say.

Ha. How long do I have to wait for you to prove him wrong? Elliot, where aaaare you?

I'm still teaching little Elliot while I have complete control over her.