Day 239: adventures in homeowning, part I 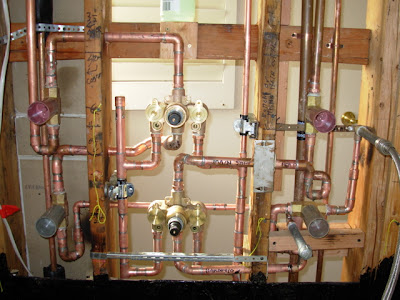 Well, we did it. We successfully purchased and moved into our first house! The whole process happened much more quickly and easily than either of us anticipated, so it's no wonder that the "adventures" began our first day in the house, and continued through the weekend.

First, let me mention that the house has been used as a rental property for several years and was empty when we bought it. The owner sold it to us "as is," with a small stipend for the things that the home inspector flagged (dishwasher that doesn't drain and a broken knob on the range).

As we were moving in, we noticed that the toilet in the hall bath wasn't flushing properly. So we bought a plunger, and thought it was remedied. It wasn't. Okay. We decide to not use that toilet, so now we're down to the sink and shower in the hall bath, and the toilet in the master bath. It's kind of confusing, so Wes taped off the unusable fixtures with duct tape. Resolved, for now.

The dishwasher was not a surprise, but it was a surprise when the home warranty folks refused to come out to repair it per our arrangement with the previous owner. Status: unresolved.

After all of our wonderful helpers and visiting friends finally left us alone last night, we decided to get down to the business of unpacking and restoring order. The house had other plans. Halfway into a load of laundry, we find a puddle of soapy water spanning the width of the kitchen. Ahhhhh. I frantically search for the bag of old towels as Wes ends the wash cycle and pulls the machine out from the wall. Several minutes under the house and one call to his handy-man father later, and it's decided that part of the pipe has corroded from months of not being used and it all must be replaced with new PVC. Fine.

So now we have a load of clothes sitting in a washing machine that's half-full of water and several sopping-wet bath towels. Sweet, ingenious Wes pulls the drain tube out of the wall and sends it out the window next to the washer to drain into the carport. It was pretty ghetto, but at least we didn't wake up to mildewy clothes and towels.

Somewhere in this process, the corner of the metal screen door in the kitchen catches the back of Wes' leg and gouges a hole the size of a penny. It was gross, and it looked like it really, really hurt. Just as we think we're finally ready to hit the hay, he realizes he has bled all over our white sheets. Two Band-Aids were obviously not enough! Into the washer go the sheets, while we wait out the cycle (so we can close the window when it finished) with a glass of wine on the couch and watch the end of of "There's Something About Mary."

Despite it all, we're completely thrilled about the house. For now, these kinds of things are actually kind of fun, I just hope they don't become a frequent occurrence!
Posted by Jennifer at 11:36 AM

yep, it was tons of fun cutting skin and digging dirt out of an open wound. can't wait to do it again tomorrow.

well ...aside from that!