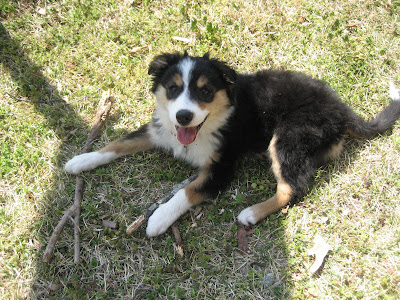 Our smart girl found the only shaded spot in the front yard!
Whew, it's been a doozie of a week already! Little Maddie got into something foul (and apparently bacteria-ridden) and has been sick since early Tuesday morning. Poor thing. According the vet, it's not serious, but it is slightly mysterious and definitely unpleasant. Poor sea grass rug, too. I'll spare you the details, but eewwwwwwww. We've exhausted all of our home remedies and are now turning to professionals; I'm determined to save it!

In the middle of all of this, our friend Ben came over to help Wes with the bathroom demolition. Actually, the word "demolition" doesn't really do their work justice, as it became an Official Bathroom Removal last night. The Sheetrock around the sink and the sub floor were both rotted, so out they went (er, more like down they went, into the crawlspace below), and I'm sure that we'll lose more wall before they're done. Yikes! 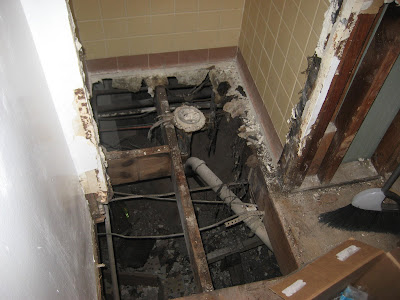 Sweet mercy! Will we ever have a bathroom again?! 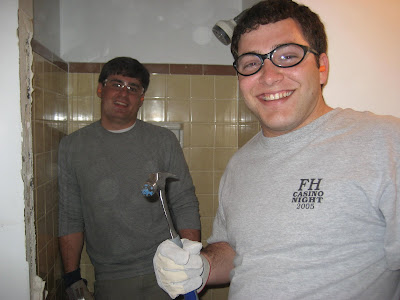 Wes and Ben were roommates, pledge brothers and classmates at Auburn. Now they work together, and you can see by this photo that they had a little too much fun at the expense of our house and at least one hammer. Thanks for the help, Ben!
Posted by Jennifer at 10:58 AM

I told you so, and Wes - Where's Waldo called, he wants his glasses back.

I've been waiting for that comment all day, LJ

Oh that hole in the floor would make me want to close my eyes, turn away and slowly walk out of the room! I cannot wait to see the after pictures!

Which: the told you so or those awful glasses?

The told you so. I was going for a Harry Potter look. Also, those are the comments that cause construction workers to take off safety glasses and then get an eye injury. Next time you should keep your mouth shut and think about how much goofier I'd look with an eye patch or a fake eye.

oh my...that would totally stress me out!! good for y'all for diy. i think i would kill my husband if we tried that.

The told you so was for the dog making messes on the rug.
You know you would rock an eyepatch and milk it for everything you could. Arrrrrrrrrrgh! Pirate Wes!

she was SICK! we're not holding it against her, and I'd take her over the rug any day