As soon as I saw this post by Joni at Cote de Texas, I knew I had something to share. Take a look at her post, and then here's a little background. I took these photos on a street very close to where we live. It's a fairly prestigious address, I think, at least as far as Vestavia goes.

The street follows the crest of a hill, so all of the houses on one side have beautiful views of Shades Valley and Red Mountain (many Birmingham neighborhoods are full of great vistas). I would guess that most of the houses on this street were built in the 40's and 50's, which is new when compared to some other desirable neighborhoods (such as those around Highland Avenue or in Mountain Brook), but are probably some of the oldest in Vestavia (which experienced a boom in growth in the 1960s and is still adding new homes today).

Okay, enough rambling. Here are a couple of my favorite houses on the street. 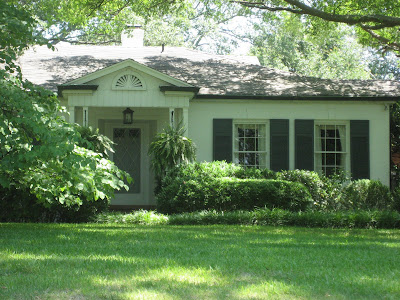 This one has the most beautiful, lush lawn. It was hard to get the entire structure while driving, but you get the idea. 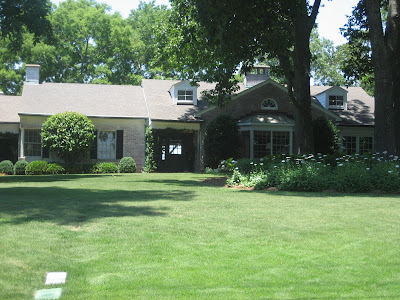 Another lovely, shaded lawn with a border of shasta daisies in full bloom. This one probably has a great view in the back, and is much bigger than this picture shows. 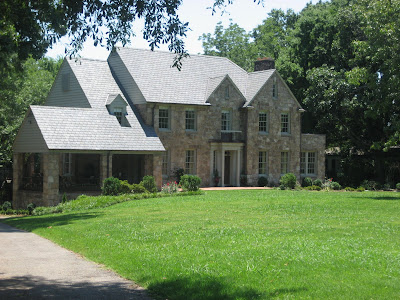 This is one of my very favorites in Birmingham. It's the perfect size for a family home and has a great, private yard. The front is obscured by a row of hedges, so I had to pull into the driveway for this shot! I'm pretty sure this is my dream house, and if I ever own it, it will have a beautiful farmhouse kitchen and big vegetable garden. A girl can dream, right? 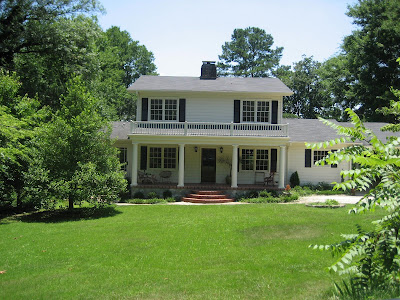 This is a newer home, but the architecture is in keeping with eclectic nature of the neighborhood. Love the super-deep front porch (it looks a bit strange in this photo, but is very cute in person).

And this is what you see just a couple of houses down: 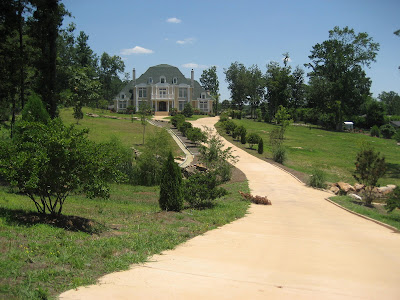 What in the world?! You can see that they builder/homeowner cleared the lot of its beautiful, mature hardwood trees in favor of a "dramatic" view of the home and couple of ill-placed shrubs. Oy. 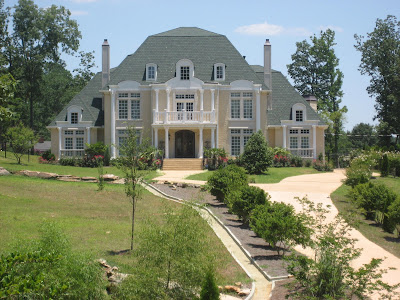 Now the close-up really just speaks for itself. Yikes. What is this supposed to be? The roofline says maybe French, but then the columns ruin that. Most of the columns serve absolutely no purpose, so why even bother?! It doesn't relate in any way to the neighborhood, and with the obnoxious iron fence around it, is basically an eye-sore.

What do you think? Am I being too harsh?
Posted by Jennifer at 10:01 AM

I don't want to be mean because everyone is entitled to their own opinions and everyone can build the house of their dreams ... something is way off with this house. If you squint your eyes it sort of looks like a big pimple. The roof line is way too high in the middle and the small windows on top of the french doors just aren't working for me. I hope who ever lives there loves it and doesn't get hurt by my opinion. Maybe in a few years the landscape will grow in and obscure some of the issues. Now I need to shut up because I feel bad but agree with you.

the proportions of the roof line is all off- but especially the chimney placement is really wrong - they look horrible. the esplanade in the middle of the lot? it's all really bad. And I'll bet the inside is worse and it costs a ton of money.

Loved the post. In fact, I love the first house so much I had to copy it into my file :) You are right about the last house. The columns are certainly not necessary. And I always cringe at the removal of beautiful hardwoods. Sad.

not too harsh at all. money doesn't buy good taste.

Sad thing is that in Charlotte, people are tearing down house #1 and building house #5. If I had to choose, I would pick #1 or #4.

Definitely not too harsh. Yikes!

I went to Samford for a year (3 years ago) and I loooove Birmingham. I worked with Head Over Heels (gym - not sure if you've heard of it), so I did a lot of driving and I used to love driving around the city and looking at all the nice houses... you chose some beautiful ones to post! I agree about the last one though - it doesn't fit at all with any of the others... definitely some bad decisions on the builders behalf.