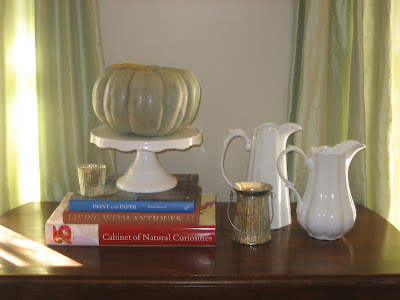 Wes had to be out of town over the weekend for work, so he left Maddie and me to our own devices, and we had some fun girly time. We headed to Auburn on Friday night to celebrate my sister's 23rd birthday and tailgate with friends and family before the Auburn-Tennessee game. Both of my sisters have pups that are just a but younger than Maddie, so she really enjoys hanging out with them (and is still pooped two days later!).

On Sunday I piddled around the house decorating for fall. I'm always moving things around so it'll probably change before Halloween, but I like it so far. All it took to spruce up the living room was a fun blue-green-gray pumpkin on a cake stand, and a couple of white pitchers from my small collection (probably inspired by this). 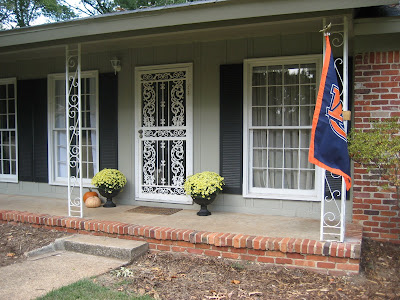 The front of our house is seriously lacking in curb appeal, and I was amazed at how much better it looked with the easy additions of two urns filled with yellow mums and a couple of pumpkins! 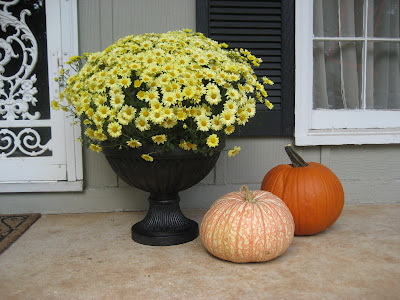 We bought these urns at the end of the summer last year, but haven't made much use of them (though not for lack of trying). The cement color was getting a little lost against the gray-green of our siding, so I took care of that with a little black spraypaint. I love the graphic statement they make.

Now if we can just do something with all of that wrought iron ...
Posted by Jennifer at 2:44 PM

awww, I love it!! I too lack curb appeal, but yours is looking great. The black urns are AWESOME!! Can you put flowers in that green pumpkin?? Or is it a real pumpkin? Lookin' good!!

Ditch the wrought iron and paint the door yellow, and I think you'd have some curb appeal. :-)

Make yourself wooden columns surrounding the existing iron work. It should be easy.

Melinda, way ahead of you on that. I'm sure that's one the of projects that will come to fruition in the next year. We check out the columns on all our neighbors houses when we walk the dog to help us figure out the right size and style for our porch.