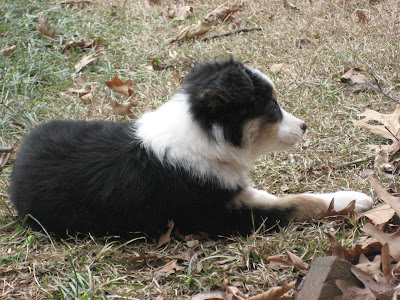 To watch her walk around our house and yard, you'd think she was born with us, but even as I'm typing this, we're not close to having spent 24 hours with her. So far, she's been lots of fun. She's much smaller than I thought she'd be -- not any taller than Peepers the Cat, wider, but not taller -- so we've definitely got a baby on our hands.

Spending the night with her was like having a baby, too. Every four hours or so she whined until I woke Wes up to take her outside. But, overall, I'm pleased at how well she's doing in her crate. I went home at lunch today to find her patiently waiting for me to take her out, where she did her thing and was ready to play. So far, her interests include: finding the squeaker in her big pink bone, chewing on sticks from the yard, barking at the screechy refrigerator door, stealing house shoes/flip flops from our closets and trying to befriend Peepers (who will have none of that). 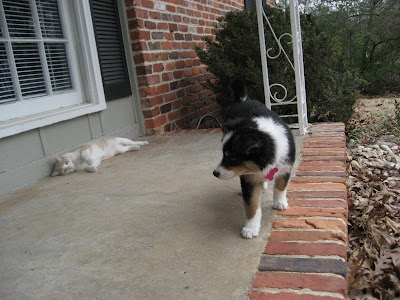 Speaking of Peepers, he's doing about as well as can be expected. His entire world has just been turned upside down, and I'd be pissy if I were him, too. He was quite relieved to find the dog was not allowed on his (er, our) bed last night, and slept on my back with his head resting on my cheek. I'm not sure if he wanted some reassurance of his place in my heart, or if he is plotting a takeover of the household and was trying to lure me to his side. He's given Maddie a few good swats in the face (he doesn't have any front claws, so they're harmless), but his tolerance level seems to be improving. We shall see. 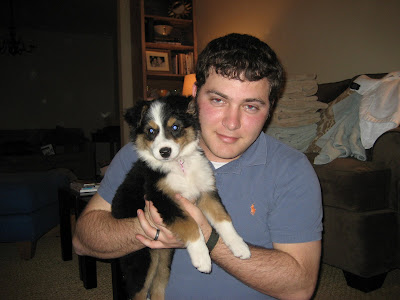 Wes was smitten from the minute he saw her. She is a sweetie!
Posted by Jennifer at 12:23 PM

You know what could calm Peepers down?

Or a visit to see her Aunt Lindsay in TN.

Okay, so you know how Austin told Wes about sofas...I need Wes to tell Austin about dogs... I can't wait to meet her!

I don't know what Wes would say, she's cute and fun but our life has definitely changed! You need some time to adjust to life with the two of you for sure.

Thank you for support, Jenn! It appears La has secret channels she is now using to convince me we need a puppy. Cute dog though!

I just stumbled across your blog, but I had to tell you that Maddie is precious!