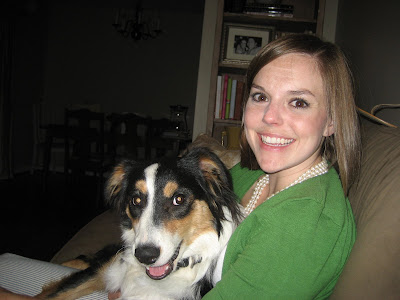 Doesn't Maddie look like she's up to something? Well, she was. Last night after our lovely and delicious meal at Gian Marco's, we came home for some year-old wedding cake. I must say, it was pretty good -- the almond extract flavoring really had time to soak in! We ate it straight out of the fridge, and I suspect it will be even better now that it's come to room temperature. 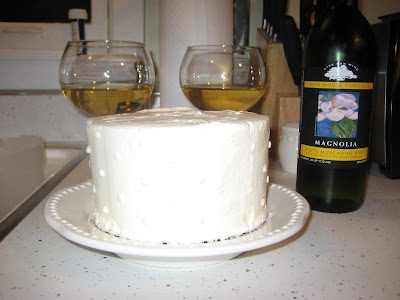 Here it is with the super-sweet Muscadine wine we bought at a wine shop at Folly Beach on the honeymoon. We were very proud of ourselves for waiting an entire year to drink it.

Wes and I were sitting on the sofa enjoying our cake (but languishing about how much we wished we had saved a piece of the delicious chocolate groom's cake) when Maddie started barking from the kitchen. I walked in and found her with her front paws on the kitchen counter (!!!) barking at the cake, which she had pushed back out of her reach (she frequently barks at toys when they are under the sofa and she can't reach them)! I guess the little stinker felt left out and wanted in on the celebrating!

Luckily Wes had put it just far enough back on the counter that she couldn't do anything except lick the icing. I don't even want to imagine the mess on both the floor and her snout if she had been able to knock it off the counter. 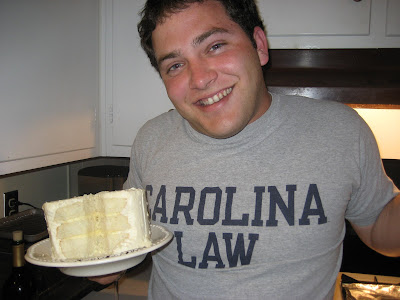 It's a bit hard to see in this photo, but look closely and you can tell that she ate along the corners made when we cut our two little slices.

Maybe she was still on a sugar high this morning, or maybe it was just the squirrel playing at the base of a tree across the street, but just as Wes walked out the door she bolted out of the yard (despite the obvious pain she suffered when she crossed the electric fence!). He spent the next 5 minutes following her through 4 backyards while shaking her treats in a vain attempt to lure her back. Then he spent about 20 minutes driving beside her as she gallivanted down our street playing in the bushes and flowers.

Luckily, a neighbor was walking her giant labradoodle (or some kind of -oodle) and Maddie can never resist making a new friend. Wes was able to snatch her up and toss her in the car while she was distracted by her funny-looking furry new pal. Needless to say, the trip back to the house did not look like this:

The exact same thing happened to us on Monday! we were eating our wedding cake & I gave Nico a little tiny bite... the rest of the night while me and my husband drank champagne, she tried to jump on the table (she is a chihuahua)and eat the rest of the cake! (I have some pictures I'll post soon!)

How many times has this happened to me with my dog? a thousand. Well, my old dear departed dog that got run over. NOw, my two new dogs sit at the open door and wouldn't even think of running out! It's weird how some dogs just have a wanderlust and others are happy at home.

Thanks for the comment = send me a picture of that house - I would love to see it!

Happy Anniversary! You two are so funny. It is 9150 days for us. Seems like it was just yesterday when we ate our year old wedding cake. We love you!
Love, Wes' Mom and Dad