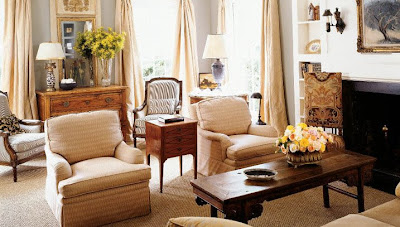 Today I'm beginning a new series, of sorts, profiling designers I love. You'll probably know many of them, but I'm hoping I can uncover some folks who might be new to some of you. I think it will be fun. First up is Mary Evelyn McKee, who works out of Birmingham, Alabama (where we live!).

I was first introduced to her work exactly two years ago this week, when I started an internship at Southern Accents. Her Birmingham home was featured in the issue that was on newsstands at the time (January-February 2007). Her style is decidedly traditional, always gracious and warm, but at closer inspection, is layered with interesting things. 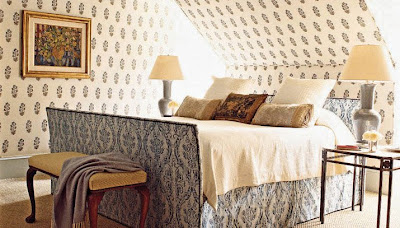 Her bedroom is one of my favorites. The Fortuny-covered bed (brought from an earlier home -- more on that later) looks so fresh against the walls upholsterd in Peter Dunham's Udaipur. 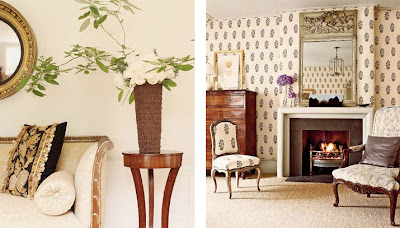 Wall-to-wall seagrass covers the floor, and a pretty trumeau is propped above the fireplace (oh, the luxury!). In the mirror you can see that a lantern hangs from the ceiling. And I'm sure you can imagine how much I just love that little Udaipur-covered chair -- there was a great shot of it in the magazine. 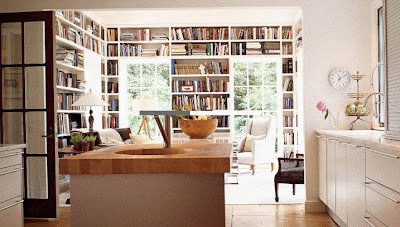 This kitchen is quite sleek when compared to her earlier work. It seems she is getting away from the super-traditional look, and adding more modern pieces. I love the juxtaposition against her typically-English antiques. 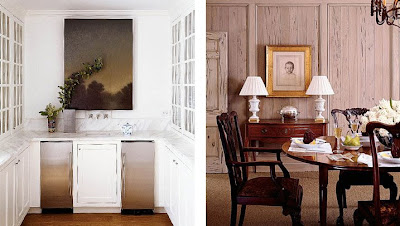 In the dining room, a Chippendale dining set looks great against what looks like raw or pickled wood (the magazine does not list the finish). 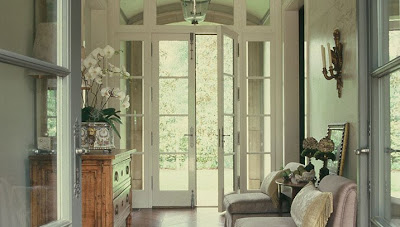 Maybe you have seen this image before, as I have seen it scattered around blogland probably twenty times! It is usually attributed to Cottage Living (because it can be found in an application on CottageLiving.com), but it was actually photographed for Southern Accents and is the entry of Mary Evelyn's previous home (also in Birmingham). 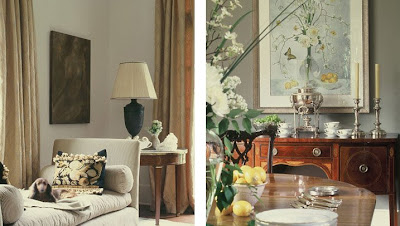 The Normandy-style house was finished much more elegantly than her latest home, which I prefer. 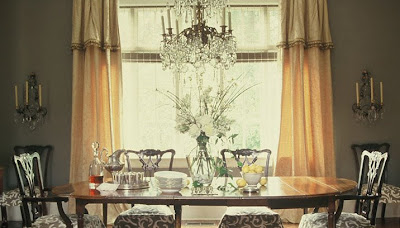 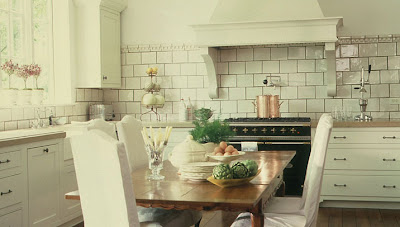 In the kitchen you can really see the evolution of her style. This is quite pretty (and is another blogland favorite) but is very, very different than the Bulthaup kitchen in the new house. 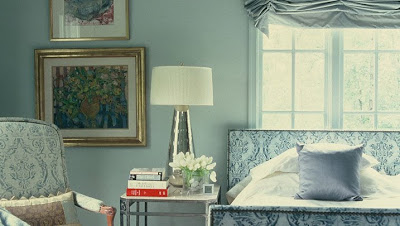 And here's her Fortuny-covered bed again, with the same bedside tables, too. Which do you like better? 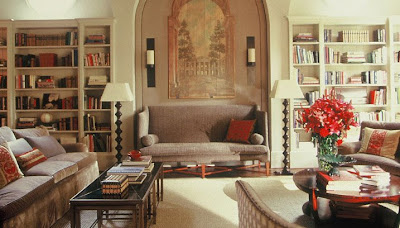 Southern Accents must really like her work, as she was chosen to design their Birmingham showhouse (in 2005, I think). The house was featured in the November-December issue, which explains the holiday decorations (which I do know where created by Ray Jordan of Flower Buds here in town). It's a bit hard to tell here, but that nook behind the bench is upholstered and then finished with nailhead trim -- love it! Love this whole room, really. 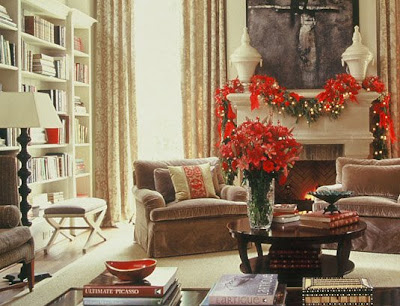 I love how comfortable and collected this feels. It definitely doesn't have the feel of a showhouse that you couldn't come into and prop up your feet. 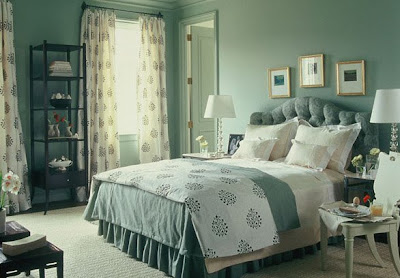 Okay, scratch my previous statement, this is my favorite bedroom of all time (blue, of course!). Just enough modern, just enough traditional, just enough perfection. Maybe one day I'll be brave enough to go tone-on-tone-on-tone like this -- even the door, moldings, and ceiling is blue! 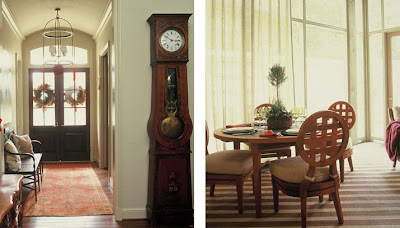 Love the double front doors and big lantern in the entry, and the diagonal stripe on the carpet in this eating nook. 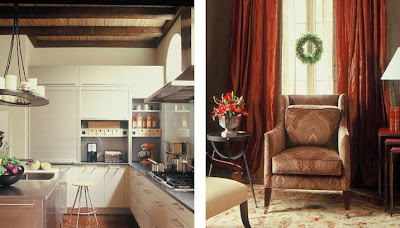 Here's another modern kitchen, one that is rumored to have caused a stir in halls of Southern Accents. The wood beams on the ceiling humble it a little, I think. 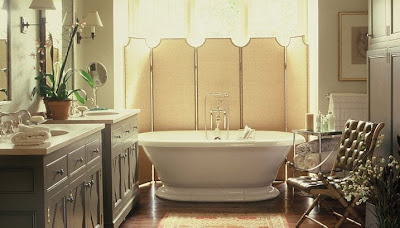 Are you still with me? I know this is getting a bit long, but I couldn't go without showing you this gorgeous bath! Her Web site says this bath is in a "Twenties Tudor" but she did something really similar with a screen in that showhouse. She definitely knows a good thing when she finds it, and she's not afraid to repeat. I also love that she created two identical vanities instead of one massive one. 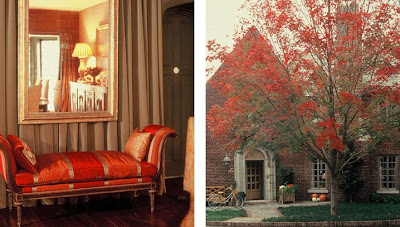 Here's a bit more from that Twenties Tudor -- of which there are plenty in Birmingham. One of her favorite accent colors seems to be red, a happy coincidence in a house with a red maple by the front door! 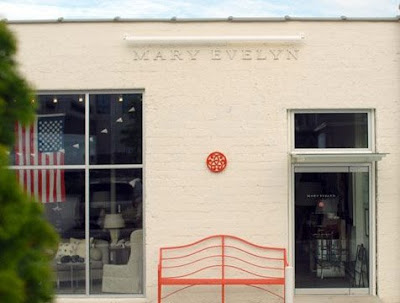 If you just can't get enough -- like me -- stop by her Homewood shop (see what I mean about the red?). It's filled with beautiful art, to-die-for custom upholstery, and really fantastic accessories -- like my fun antique bells.

http://www.maryevelyn.com/
Posted by Jennifer at 10:59 AM

great post! definitely saw pics that have floated around blog land but i didn't know the designer...so thanks for the introduction. and i love the bedroom w/ the upholstered walls....oh, to be rich...

I enjoyed this post. I have never been to her shop before... but think I may have to stop by.

i think i will check her store out tomorrow. i am going to hit all the homewood shops for bedroom ideas while the kiddos play at a friends.

I'll have to stop by if I ever find myself in Birmingham!

If you like these, you should also check out:

wow, these rooms are oh so gorgeous! classic, elegant and stylish!

I love so many of these images, a few of them are among my favorites - thanks for the profile, I did not know the designer's name.

I love her previous home in Birmingham - her dining room picture was in my 'virtual home' a few weeks ago, because it is a great youthful take on really traditional furniture.

I am not sure why I had not discovered you before today! I look forward to reading your blog.