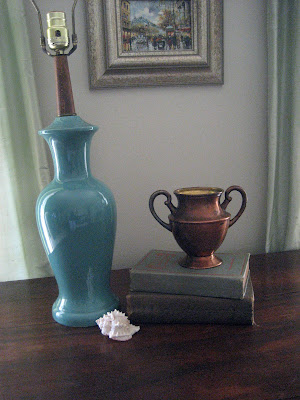 We had a weekend of ups and downs, first the up. Since we're old people now (ha!) and unable to sleep in, we were up and going at 7am on Saturday morning. I had seen a sign for an estate/garage sale close to our house, so we checked it out. It was kind of a bust, but it led to a treasure hunt of 7 or so other sales around town. We just followed the signs!

We spent about $14, and came home with two old books (a 1937 edition of Gone With the Wind and a 1914 book on etiquette), a cute copper urn (for 50 cents!) and a really pretty turquoise ceramic lamp with a neat wooden neck. It works, but I'm going to rewire it and get a shade and give it my sister, who's getting married this summer (don't worry, she already knows about it. I was so excited about my $3 find that I took a camera phone pic and sent it to her as soon as my transaction was complete). 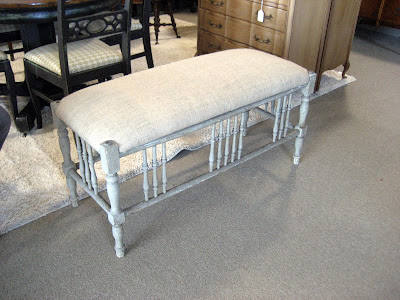 While we were out running errands, I convinced Wes to stop into an antique store I recently discovered. I had seen this fabulous bench one afternoon on a quick stop-in, and was curious whether it was still there. We scoured the aisle where it had been, but to no avail. I chalked up to a loss. We continued to browse for fun, and as we turned a corner (on the opposite side of the store!), there it was! And just as lovely as I remembered.

The shop was having a sale, and Wes was instantly as enamoured as I had been (which doesn't happen often), so he floored me when he offered to take it home with us that day! I still can't believe it; he is too good to me. Anyway, the base dates to the early 1900's and it has the original paint on it, which is appropriately chipped and has faded to a lovely shade of blue-gray. The seat is new and covered in burlap, and I just love it! Thank you dear!

Local gals (or guys) might want to know that it was in the Hoover Antique Gallery, which is conveniently located next to/behind the HomeGoods on Highway 31. It's a dangerous little corner, that's for sure! 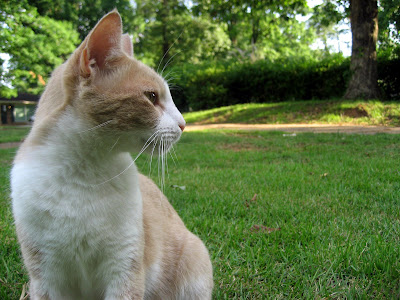 And then to not-so-fun part of the weekend. We haven't seen our beloved cat, Peepers since Saturday afternoon. He loves to wander outside, but always always always comes in for the night. Everyone keeps saying that "cats do that," and I had a kitten disappear and then come back 6 months later when I was a kid, but it's not really much consolation, to be honest. I've made some posters to put out around the neighborhood today, so I'm hoping that either someone invited him into their house (he's never met a stranger!) or that someone will know something. At this point I just want to know if I should still be watching the kitchen window for him to let me know he's ready to come inside, you know? Sorry to be a downer!
Posted by Jennifer at 10:18 AM

Great finds, Jennifer! Love them all!

I was sorry to hear about your kitty. I hope he turns up soon.

Oh I hope you find Peepers! Bless him! Also, I'm really jealous of that bench. That is exactly what I'm looking for for our bedroom! Love it!

High-Heeled Foot in the door said...

Totally an up and down weekend. Your garage sale finds are just perfect. I loved all of them and that bench. Wow! Love it. Yay for Wes and getting it home that day.

So sorry to here about Peepers. I hope he finds his way home soon!

oh no!! hopefully peepers just went for a little "adventure" and will be home soon! love the bench!

And I hope that Peepers comes home soon!

Thanks for the info on the store in Hoover- I've never been there!

Aw, little Peepers! Surely he'll come back soon. Y'all are too good to him.

Also... my brother's sister-in-law and her husband had a garage sale this weekend (near your house, too), and it makes me wonder if you went to it. Hmmmm...

Hope your kitty comes home soon!! I know how you feel. We thought our cat was gone as it didn't come home all day, but then it showed up all dirty about 11pm that night. We assume a dog chased it and the kitty hid until it felt safe to come out of hiding.

I am sorry to hear about Peepers and hope you know something soon.

I loved hearing about your weekend. Great garage sale finds, at awesome prices!

Jennifer...so glad to hear that you turned a corner and found the bench...even happier to hear you have such a caring husband who enjoys making you happy...so nice!

Your beautiful kitty story makes me sad. I've been there too and understand how crazy you can get looking out the window and waiting for him to show up. Lets hope that is exactly what he does. Please keep us updated.

So sorry about your cat. Hopefully she comes home soon. I do love your finds. That bench is stunning. I am so going to check it out.

the bench is gorgeous!

so sorry about your cat! here's hoping he's just vacationing at the neighbor's.

I work right off Riverchase Parkway and may stumble over to that dangerous corner!

I'm so sorry about your cat! I have a precious kitty that I would be just as devastated and wouldn't be able to stop looking at the window!

Love the bench, and already recovered in burlap, what a dream come true!
I am very sorry to hear about your cat though :(
~Dina

My tomcat would go away for months at a time during the summers, and once we figured he wasn't coming home, there he was! So hopefully Peepers just got a little distracted and is on her way home to you!