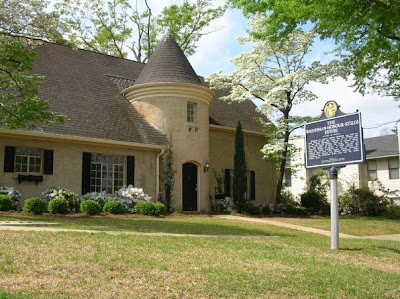 I was going through old pictures on my laptop, and found pictures of my room in the house I lived in the last few semesters I was at Auburn. I lived on campus for most of my time in school (I was an officer in my sorority and had to live in-house, or, in-dorm, in Auburn's case), so yes, having my own room (!) in a house (!) warranted a few pictures. Some girlfriends moved into this great old house a few blocks from campus, and I jumped at the chance to sub-lease when I heard one was moving out. It was nicknamed "the castle house," for obvious reasons, and man, it was such a great house. I still fantasize about buying it and fixing up sometimes. Clearly, I need a hobby! 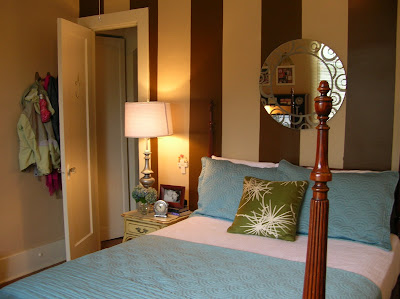 My room was right in the middle of the house and I think it was originally intended to be a study, as it opened to the entry hall and the side hall. It had just one tiny coat closet (the other bedrooms had walk-in closets), so my stuff was kind of all over the place (but that's nothing new, really).

The stripes on the wall were already there when I moved in. I didn't mind them at the time, but now they do seem sort of odd. I didn't really have any budget for decorating, but I was proud of what I managed to pull together. The little four-poster bed belonged to my great grandmother -- it was on loan from my sister at the time -- and I bought the blue quilt set at TJ Maxx. The Thomas Paul pillow and the mirror came from a little shop in Auburn. 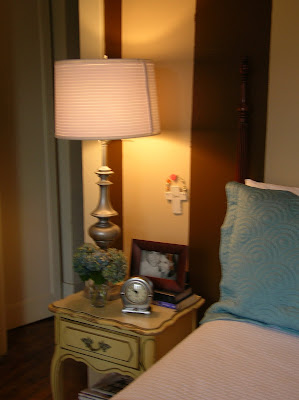 The little bedside table came from Angel's Antiques, and actually belonged to a friend who was studying abroad in France at the time. I found the brass lamp in my grandmother's basement and spray painted it silver. That's a stack of Cottage Living magazines on the bottom shelf (sniff, sniff). 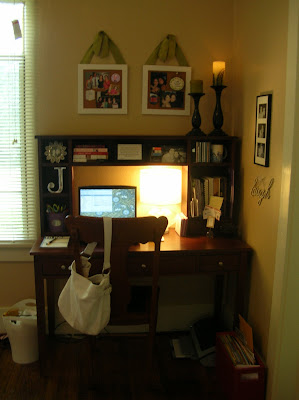 I found the desk and hutch on super-sale at Target one day, and they lived in boxes in Wes' basement until I moved out of the dorm. I still fully believe in buying things that are on sale/you totally love, even if you don't have a place for them quite yet! I bought the little white framed bulletin boards at Target, and then hot glued ribbon on the back. Wes thinks they're a little too girly, so I gave them to my sister. 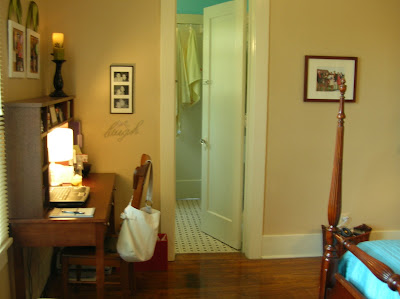 The house had such good bones. Here's a view into the bathroom I shared. It had black and white marble tiles, and you can see that the doors had the original glass knobs. Love that. 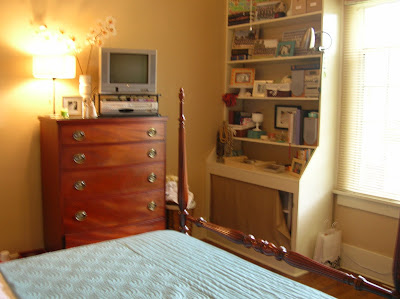 And on the other side of the window was a built-in bookcase (another reason I think it was supposed to be a study), which was handy for storing all of my junk! Good grief at the clutter! My mom found the bow-front dresser at an antiques shop in our hometown, and I still have it (and love it) in our bedroom today.

I had so much fun looking back. I can really see how my "style" has evovled and changed and been influenced by what I do at work. How has your personal style evolved?
Posted by Jennifer at 6:22 AM

Love the castle house! And my style seems to be always evolving! :)

this looks great. I love mid century modern now more than i ever thought i would, before i was much more bright.

i have that same mirror-got it from Behind the Glass-is that where you got yours? It was in my room at my apartment in Auburn during college, too. I love that mirror. It is stashed under a bed right now because it doesn't really go with my style now-still love it, though. Funny how our styles evolve!

Hi, Jennifer, how about that?! We could have passed each other on the trail & never known it. It is such a beautiful place to walk & Sunday's weather was perfect. Thanks for stopping by.

i love it! the castle house was occupied by boys when I was at Auburn... so glad to see that girls have taken over! what an awesome space! that tile and those door knobs are dreamy. love your mix of old and new! bravo!!

polka dot -- yes, they came from Behind the Glass. the house was on Magnolia so I walked past BTG on the way to and from class -- very dangerous. I still love my mirror too, but unfortunately it fell off the wall in my B-ham apartment and broke.

erika -- we moved in right after the boys. it was ... interesting. why do college-aged boys destroy perfectly good houses?? anyway, they entry hall with the odd faux brick wallpaper is now pink :) the castle house is in better hands.

I grew up in very contemporary style houses, and when I got married I tried to go in the opposite direction and emulated the style of my mother-in-law, who had very traditional taste. Now that I am older and not as 'in awe' of my mother in law, I am forging my own path. I like a lighter look, a more layered European look, and with contemporary touches in the art and some of the furnishings. I am slowly but surely replacing the 'hand me downs' from my mother in law with things that are more my style. I must admit that reading blogs and writing my own blog have had a tremendous influence on defining my style. I love it when a blogger points something out that I had not even realized - like how I do not gravitate to prints.

Just blog hopping and found this post... I loved the castle house- like Erika mentioned, it was occupied by boys! I always knew it had good things in store! Behind The Glass was one of my weaknesses while at Auburn, I seriously had to cut myself off every now and then!