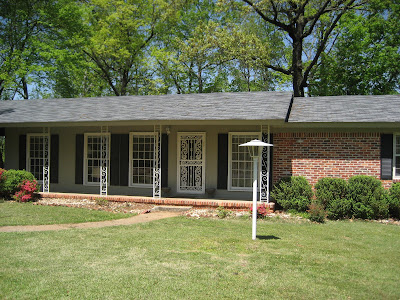 From the moment we bought our house, we had a list of things we wanted to do. Some of them we've done (painting, tearing out old, leaky bathrooms), and some of them we haven't gotten to quite yet (remodeling the kitchen, for example). Some are much bigger than others, but they all have one thing in common: I've come up with at least three ideas for every project. Our front door is no exception. We immediately knew that the wrought iron storm door and swirly "columns" had to go. I also wanted to move the sconce to a more reasonable place on the wall, and probably add another. Those were the constants.

What to do with the front door was the variable. First, I wanted to replace it with a new, wood door with windows. Do you know how much those cost? Too much. Then, I decided that we should just add molding to our perfectly nice, heavy wood door (which we already own), strip off the paint and restain it. Yes, that was a great idea.

But you know how it is when you know too much. Every day, someone out there in blogland posts about something and it becomes my must-have-that for the week. A few weeks ago, it was blue front doors. 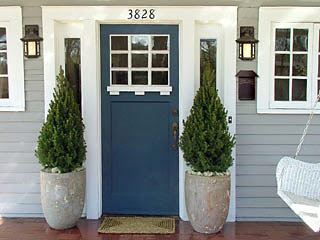 Photo by Rex Perry for Cottage Living
This one got me started. The color of the siding is similar to what we have, and it looked nice with the blue. We also have red brick, and I knew that blue would easily complement that. 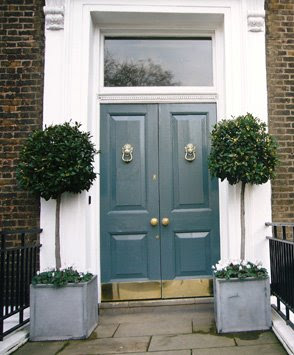 Then My Notting Hill posted this image, and it was all she wrote. Wes has never turned down anything blue in his life, and I think he was relieved that he wouldn't have to strip the paint off the door.

So, we got to work. The screws holding the storm door in place were rusted, stripped and painted over, so it took a hammer, a vice-grip and some major muscle to get that thing down (and then more muscle to move it -- that thing was heavy!). I picked out a Ralph Lauren color for the door (Cafe on the Riveria) and had it matched at Benjamin Moore in an outdoor formula.

That made such a difference. Just like Keller Donovan said, the entry was so much more welcoming without the storm door -- especially since it was covered in metal! It really cleaned up the facade of house. 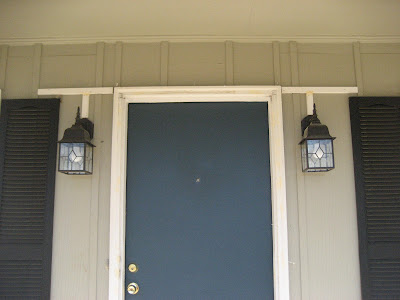 Then, we tackled the lighting. The single, wimpy sconce was perched to the left of the door, above the shutter. It was casting light onto the porch, but that's about it. I somehow talked Wes into adding another sconce to the other side, even though we discovered that just moving the original one would require some crafty re-wiring.

The wires for the original sconce came out of the wall behind the shutter (which explained a lot), and we didn't have access to the inside of the wall. Wes came up with a great solution: He bought some MDF trim and hollowed out the back to make a "chases" for the wires. Since we already had some trim the same size, it made perfect sense.

Side note: You really shouldn't use MDF outdoors. But, it's pretty protected from the weather under the porch, so we're giving it a shot. 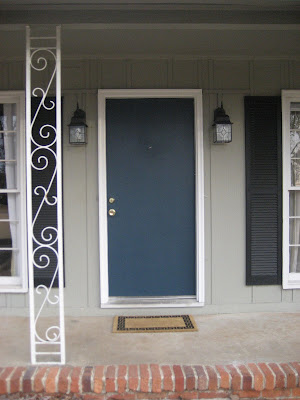 After cleaning up the door frame with Elmer's Wood Filler, sanding and painting it, you'd never know there was another door there. And after we found a can of the outside paint color in the basement, the new chases blends right in. The pair of sconces added some much-needed symmetry, and the fun blue door added just a little bit of style. Now I feel like the outside of the house reflects the inside so much better.

Stay tuned for Curb Appeal 2: The Death of the Wrought Iron Columns. Coming to a blog near you.
Posted by Jennifer at 9:45 AM

Labels: before and after

And I couldn't help but smile when I noticed that we now have the exact same porch lights! They were one of the first lighting installations that John did a few years back so I literally thought they'd be the death of him (I later learned that when the power's off it's all good).

Anyway, your porch is bringing back home improvement memories that I had long since forgotten. Thanks so much for the eye candy!

Looks great. I just love before and afters. Can't wait to see Curb Appeal 2! It's so fun to complete projects around the house. I am tiling my kitchen backsplash this weekend- we will see how it goes. Hopefully it will go well enough for me to post photos on Monday!

I love the blue door. Have you thought about adding a brass knocker similar to the one in the inspiration photo?

Cafe on the Rivera is one of my favorite Ralph colors! I've used it a couple times on a couple different projects. Those double doors are to die for. Your house looks great! Can't wait to see what's next.

Sherry -- that is too funny. Since we put the sonces up, I noticed them on at least four different houses between our house and the grocery store. I guess that's what happens when you buy things at Lowe's!

Blueprint -- sounds intense! Can't wait to see what you do.

Ann Ever -- sure have! We're contemplating several accessories for the door, but that's an entirely separate blog post!

Saltbox Girl -- I love the color, too! I'm trying to come up with another reason to use it ...

we have wrought iron columns too. and i hate them. looking forward to seeing your solution.

Way to go! On your first pic, I couldn't see where your door was at first, with that white metal, it blended into the windows (which I LOVE your huge windows by the way!). I agree with others, the blue is great. And good job on the lighting. That's always a fun project. We're doing curb appeal right now starting with our landscape. What fun ;) I have cheesy round columns that support my overhang, I'm interested in your solution.

Looks so cute! I love your blog.

What a great color choice. I would have never thought of blue.

I had such a hard time picking our door color - but once I picked red, I was thrilled I did. No going back.

Curb appeal is also on our (my) list this summer - mostly just landscaping and clean-up. Can't wait to see what you do with the posts.

It looks so great! I noticed in your inspiration photos they had topiaries on either side of the door. Are you planning something like that, or is that not possible because of Maddie?

Looks terrific! The sconces are great and I always love a blue door. Looking forward to what you do after you kill the wrought iron.

Great choices! I always love seeing pictures of your projects. You've got so many great ideas! I know what you mean about changing your mind with all of the ideas out there in blog land. I bet you won't change your mind about this color, though. It's fabulous!

Looks great! Taking off our white screen door and painting our door black was one of the first things we did. It made such a difference. Enjoy coming home to your fabulous blue door!

Love it! I just painted our door blue, although I think it is a little too bright. Looks great, can't wait to see what you do with the columns!

We both really like the new door! Can't wait to see the new columns!

I love the update!

Love the new door and the color!!!! You guys are so talented. If Clay and I had even 1/8 of your DIY abilities, we would be a lot better off! Can't wait to see what's next :)

I am so loving the blue. Great work you two! I can't believe you don't love all the swirls though, ha!

Hi - do you have the name of the paint colors you used for your exterior walls and door? I really want to try to find a nice sage-y green - but they are hard to find! Thanks!