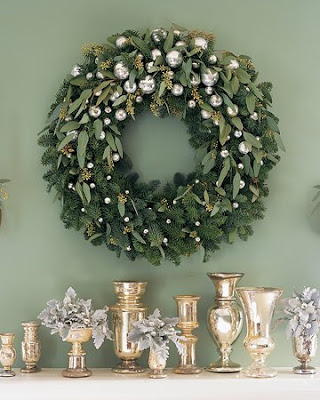 When we were in New York last week, the sidewalks were filled with workers stringing lights, hanging garland and tying bows. The Macy's at Herald Square was so crowded that I don't even want to think about what it will be like in December. The snowflakes lights were up at Saks (though I never saw them on). I thought this early decorating was isolated to New York, which obviously draws a big holiday crowd, but sure enough, the garland is up at the mall near my office and even at the grocery store. One of my facebook friends announced yesterday that she was putting up her Christmas Tree. 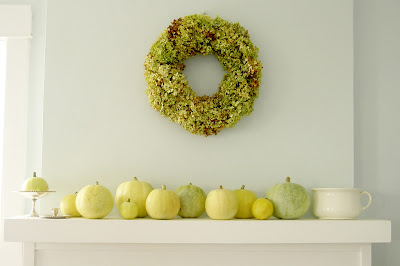 Personally, my Christmas decorations will stay in the box until after Thanksgiving, but that doesn't necessarily mean that seeing them around town doesn't get me in a festive mood. So what about you? When will you decorate for Christmas (or what-have-you)? And while we're on the topic, is this year going to be different than years past (I hate to use the dreaded e-word!)?

Photos: Martha Stewart and Melissann on Flickr.
Posted by Jennifer at 10:32 AM

Thanksgiving is long over for us....so Christmas here we come!! As long as it is after Nov 11 (Rememberance Day), decorations are welcome in my house!

And we'll be spending the same as we ever have...but we always try to keep spending under control.

I will put things up after Thanksgiving if we are at home. If we go away for the holiday then I try to put Holday decor up before we leave. I t is nice to come home to a decorated home & not scramble to get things done.
L

We'll likely be spending about the same this year as in year's past... Although my husband's siblings and spouses have decided we're drawing names instead of buying everyone gifts this year!

the week after Thanksgiving is always my goal. I like to take one holiday at a time. enjoy each one separately.

I just can't bring myself to decorate for Christmas until after Thanksgiving. I've already heard Christmas music on the radio!!

I am firmly in the "not until after Thanksgiving" camp. I love each and every holiday and want to make sure I truly savor the current one before moving on to the next. This year, the tree will likely go up on Nov. 29th, when Hubby and I return from Texas.

I don't know how much christmas decorating i'll do this year. we're living in a shoebox apartment until our house is finished. :( not even enough room for a tree!

December 1st! I put my decorations up and buy my tree that day.

I like to extend Christmas as long as I can. But, it still doesnt mean that my decorations come out before Thanksgiving. They stay hidden till then :)

I'll be decorating after Thanksgiving. It's still pretty warm here in North Carolina, so I'm having a hard time believing that Christmas is a little over a month away. :)

Not until after Thanksgiving, I'm with you on this one. But, that being said, I don't mind that Starbucks already has their Christmas drinks available :)

No Season Before Its Time is my approach to all holidays.

The weekend of T-giving! My favorite weekend of the year!
I am going to make the round shiny ball ornament wreath on Eddie Ross' site...I hope it turns out!

I love the top Wreath! so cute!
and thanks for the info on NYC, My husband and I are going for New Years Eve!!

Love the images! I like to decorate after Thanksgiving. I was completely shocked however to find out that my husband didn't want to put up a tree until XMAS EVE!!! So we've compromised in between as I've convinced him that we have to pack in as many cider sipping moments in front of the tree as possible!!! Happy Weekend! xoTrina

We don't have Thanksgiving here in UK but we very much wait until December hits before any decorating is done. And I try to do it a little at a time until the tree goes in on the week or so before Christmas. Know of a few people here who do not put tree up until Christmas Eve! I couldn't wait that long.

I'm trying really hard to wait until Thanksgiving to actually put up and Christmas decorations, but I've definitely got Christmas on my mind. There's a lot of white lights around our town, but nothing explicitly Christmas yet (you know how some stores always have white lights on their trees? They're like that). But if it keeps snowing, then I may have no choice :)

I'm the day after Thanksgiving kind of girl!

Jane -- have you seen all of the cute tabletop trees that Martha especially seems to like? I wrote about them last year: http://newlyweddiaries.blogspot.com/2008/12/day-353s-alternative.html

and StyleCourt posted about how to do it this week, which I hadn't seen before: http://stylecourt.blogspot.com/2009/11/containment.html

This site is one of the best I have found :
=> Interior Decorating Ideas <=


Excellent information and facts. Only real difficulty I was basically receiving was viewing the pics. No idea exactly why.