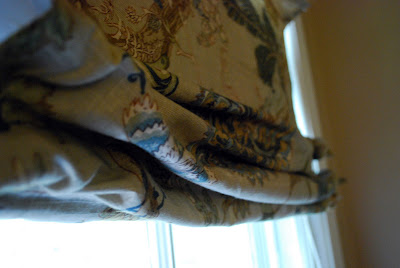 Surely I'm not the only one who occasionally (er, perhaps slightly more often than that) struggles with projects, right? "Struggle" might be a slight understatement with my latest: making roman shades out of mini blinds.

I saw this project on Little Green Notebook on the very first day I found that blog. I declared Jenny my DIY Hero and have been dying to try it out on one of the 4,276 windows in our house dressed in lovely mini blinds. You can get the directions for the project here, but the gist is that you cut all but the lift strings on the blinds, remove the bottom and all but enough slats to create the folds, then put it back together and attach fabric to the front. It sounds complicated, but wasn't too bad. That is, it wasn't after I ruined one set of blinds by accidentally cutting the lift string -- good thing we have plenty of extra sets.

They looked great and raised and lowered like a dream, but since the fabric was a pattern, I wanted to add a black-out liner. So I bought a few yards in Fayetteville over the weekend, thinking it would take just a few minutes to glue it to the back. That part was true, but when I hung it back up, things started to fall apart ... 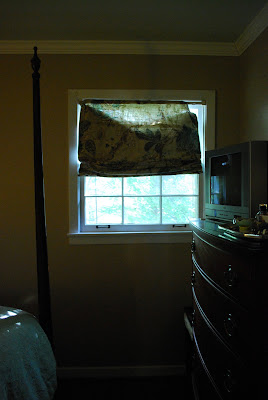 Um, that wasn't exactly what I was going for! Clearly I need to glue the liner to the top, but that won't solve all of my problems. 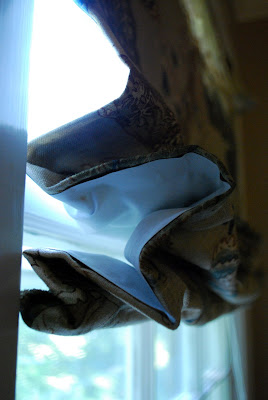 After some raising and lowering and trying to encourage the liner to fold properly with the fabric, I realized that the lift cord is preventing that from happening (because it is in between the liner and the fabric), and is causing the major bunching action you see here.

I think I can salvage this one by cutting the liner along the lift string and re-attaching it in three pieces, and now I know I need to line the fabric before attaching it to the shades next time. Live and learn, right?
Posted by Jennifer at 10:10 AM

oh, I am so sorry but also so glad I am not the only one with decorating disasters...from what I can tell they looked good before you added the liner...good luck!!

I saw this project as well and I am dying to try it! I also learned the hard way about adding the black out lining when adding it to the bamboo roman blinds. Live and Learn is right!

I think you can definitely salvage these Jen, and I'm loving the fabric!

I actually hung my bamboo blinds upside down when I first got them - anything can happen!

I adore your blog and also adore the fact that you were kind enough to 'keep it real' about your DIY mishaps.

Those curtains are going to look fabulous once completed!!

I am sorry for your blunders - I myself have had my share!

I also saw this on Little Green Notebook and thought it was a great idea as I wanted to make a roman shade. I did not have any miniblinds thought so I made a shade by looking at one I borrowed from my mom - it turned out really well so if you can't get it to work, I would encourage you to try it without using the mini blinds!

I love this project, and have been dying to try it as well- sorry you got messed up a bit, I think if you cut it like you said and glued it back it should work- worst case do you have another shade to try it on?

I saw this and was going to attempt it. (Man - you got to it fast!). I was also going to add some blackout fabric to the back. But then thought it wouldn't fold properly, and would have to attach the blackout fabric in areas away from the string on the back...? I didn't think to ad it to the front under the facing fabric.

I hate that it didn't work but it sounds like at least there is a solution! Live and learn is right! I am so impressed you are doing that project in the first place!

Glad to know I'm not the only one with DIY projects gone wrong. Although yours looks good... and seems like it will work out for you.

oh jennifer, so sad, but I am sure you can fix it. I tried to have a boy help me with my basket lamp and it is a complete blunder. now I have to go back out and buy another lighting kit. My cheap project is getting a bit more expensive.

Loving that fabric! Hope you post a shot of the project once it is completed. It's looking good.

i did the same exact thing when i saw the little green notebook blog. oh, well. i figured it out eventually. i wish i had seen your blunder post before i started my project though, would have been a lot of help. the new ones look great by the way!