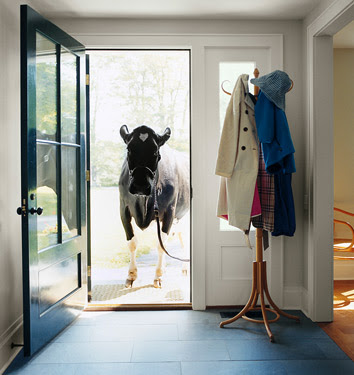 Wes and I have a modern relationship. What I mean is, we do a lot of communicating via e-mail and text messages. It's kind of lame, but necessary. He always sends me links to things he thinks I will like, and this morning, it was two stories about unusual animal pairings (here and here). I was highly entertained, but also nostalgic because they reminded me of a childhood pet: Our cow named Rooster who thought he was a dog.

Yes, you read that correctly. You may know that I consider my childhood home to be a small farm in southern Tennessee, but did you know that my dad was a country veternarian (think James Harriot)? One day a local farmer appeared at his clinic with an hours-old calf that had broken his leg during or shortly after birth. His mother and twin calf joined the herd but he, of course, couldn't keep up. His leg needed to be fixed and he would have to be bottle-fed, and this farmer didn't have the time or means to do either. My mother -- who has a soft spot for all things small or helpless -- happened to be there that afternoon and volunteered to take him. So, my dad did orthepedic surgery on his leg and we brought him home.

Have I mentioned that we didn't have any other cows? Rooster (who is named after John Wayne's character in True Grit, Rooster Cogburn, and not a bird) spent the beginning of his life in our horse barn, where his constant companions were our dogs, particularly an Australian Shepherd named Nick and a little terrier mutt we called Little Orphan Annie (another of mom's rescues). The dogs licked him clean after his bottles and spent the nights with him, and to this day, we're all pretty sure that Rooster thought he was a dog.

After he was healed and big enough to go out into the pastures, he could always be called to the fence for some affection (he liked to be scratched behind his ears) and would follow us back and forth if we walked through the pasture to get to the pond or the cabin my dad built on the property. He eventually became somewhat of an escape artist, preferring to spend his days lounging with the dogs under the pecan trees next to the house than with our horses, none of whom ever gave him the time of day. Well-meaning passers-by often stopped to let us know that our cow was out, but he was stubborn, and not even bribes of feed and treats could get him back through the gate unless he wanted to go.

The picture above is not Rooster (it's from domino, actually), but I do have a similar mental picture of Rooster standing in our front doorway as my younger sister -- curious about whether he would come in -- called him from inside. Ever the sensible first-born, I closed the door before he could make his move. We both already knew that he definitely would have come in if given the chance!

Rooster died of complications due to old age a couple of years ago (a fate not many Angus cows see), which was for the best since we no longer have the farm. I'm sure Rooster would have been quite happy to move to Birmingham with my mom and live in her suburban backyard with the dogs, but I doubt her new neighbors would have been so amused!

Happy Weekend!
Posted by Jennifer at 9:56 AM

Jennifer,
What a sweet story! The picture you posted is one of my favorites that I have saved in my files and I'll always think of your story of Rooster when I look at it.
Happy weekend to you,
Trina

Your story has me smiling at my desk this morning!! Thanks.
Happy Friday :)

I love this story of Rooster (and will never look at that Domino picture the same way again!). When I was a kid, we went to a horse ranch/farm for summer camp every year, and I (from my 9 year old perspective) never observed the cows having as much personality as Rooster! This story made me smile. :)

Have a great weekend,
Kelly

this has me grinning from ear to ear. Now I want a plot of land so ellie and kj can have their own cow :)

Great story Jennifer!! Thanks for sharing

if there was ever a story/reason why to become a vegan, this is it. i'm saving this story to my favorite file. all animals have feelings. i'm about to cry.

in fact i'm going to do a link right now to it.

I came over to visit from Janet's house. What a great story!

I love the picture! Now I don't feel so strange for having an emotional attachment to the black cows i drive past everyday...

Too cute. I had a pet bull, Pokey, when I was younger. His mother abandoned him after a very long birth that ended with my dad having to assist. He was so lovey and definitely came in the house a few times (shh, don't tell!)

such an awesome story! brightened up my friday in advance of the weekend :-)

What a fantastic story. That is so neat! Thanks for sharing and making me smile. :)

Coming to you via Janet's link today. Love your story and am off to check out your blog.
Happy Friday!
T

I love, love LOVE this post-thanks for sharing. :-)

precious story - LOVE that the country life can handle a cow who acts like a dog! Makes me feel so limited in my suburban/cement wonderland......

Definitely a lovely story! How wonderful that you get to have such nice memories. Thanks for sharing that one.

This is exactly why I don't eat meat. Thanks so much for sharing such a heartwarming story!

aaaw! I want one!

This is the best story ever Jennifer. I LOVE animals and was just smiling thinking about a pet cow! Such fun memories from childhood. BTW, when do you find out what you are having???

That is so sweet. I had a pet cow named Dutchess that I raised for a 4 H project when I was 11. She was a black angus and she lived her entire life on our farm. She was bred each year and the proceeds from her calves paid for my braces and even helped when college tuition came around. I would like to think it helped me to find my husband, because he said that he fell in love with me in college science class when I told the story about my pet cow. My how I miss her now! Carla

What a cute story! I love it!

What a gorgeous story. I love hearing beautiful caring stories about animals when ost of what we hear is so sad :)

I loved this story- I can picture the doorway and I remember the animal family members. How I wish I could come there again. I love ya'll and miss ya-tell your Mama!
Lorie

Your story aught to be published....very amusing! I loved the stories about James Harriot as a kid....I can just imagine what a happy childhood you must have had, too. ;-)

That is adorable. Such a sweet memory. Lucky you.

That is such an amazing story, I am sure I would have loved Rooster!

How cool is this story? I love it. I think having a cow growing up must be one of the neatest things to remember.

Your post left Sunday morning smiles all around our house. What a great experience and lovely memory! Your story makes me want to sell our little house in the city and head for the country. One day...

You might want to visit Pioneer Woman. She has a cow that hangs out on the porch with the dogs. And even sticks her head in the house when the windows are open and lets little kids get on her back. :)

I lover your story about Rooster.

Cute, cute story, Jennifer! I love that and the way you told it was perfect. Yep, PW has a cow in her front yard too, she told us about Daisy. I didn't get to meet her though. :)

You may have seen that I finally met Marianne & actually sat on the plane with her up to NYC. So, we must all get together soon!

That was a brilliant story, thank you for the smile! xx

What a great story. Thanks for sharing!

for the love of a house said...

Dan grew up on a dairy farm in Oregon; he has lots of sweet cow stories!!

That is such a sweet story! My mom grew up on a farm, and I'm going to pass this post on to her. She told me that would always get in trouble as a kid because she would bring lambs into the house at night - she didn't think they should sleep outside!

I LOVE this story! I have a similar one- I delivered a lamb for my dad when I was about eight, but to my dismay a donkey stepped on him a few days later. I begged my dad to keep him and promised to make sure he healed (my dad was a vet too). So I kept my promise. I made a sling out of various saddle parts and a few weeks later, taught the lamb to walk. I cried for days when I realized this mean he couldn't come in my room and play dress up anymore!